utumn is the season for fungi, which often sprout in unexpected places, as Rufus discovered when walking through the main cemetery in Reepham. There under the splendid Cedar of Lebanon, not far from the entrance, was an unmistakable Cauliflower Fungus: a hemisphere of flat interlocking branches, a handspan across, which as it had been broken apart, showed the structure of the vegetable it was named after. A walk along Back Lane passes Reepham’s ancient oak tree which is probably about five hundred years old. Travelling that way in late September, we noticed it had sprouted a Beefsteak fungus, a thick reddish growth named for its colour and shape and the fact that it sometimes exudes droplets of reddish fluid. Fungi are often host specific: the Cauliflower usually grows on coniferous tree roots, the Beefsteak on Oak. Many have a mutually beneficial relationship with trees, but those which grow on wood are all species that cause rot, helping to recycle nutrients into the soil.

On a trip to Buxton Heath, we found a few fungi, but as yet none of the bright red Fly Agarics which normally grow 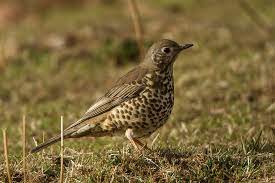 there in profusion. We were very pleased to see a large flock of Mistle Thrushes however as they flew between Rowan trees. We wondered if these were the first winter thrushes from the continent, but on checking our reference books found that they were much more likely to be local birds which form flocks at this time of year. Clearly they had had a good breeding season and raised many young, as there were over thirty of them. Rowan berries are the first to ripen, so are eaten in early autumn before the birds move on to Holly, Yew, Hawthorn or even Cotoneaster where there are large bushes. Garden birds need increased supplies of food as the days get shorter and the temperature drops.

Feeding the birds can result in strange plants coming up. Lorna noticed an unusual grass under her feeders which turned out to be Millet, while my father has had both Thorn Apple and Apple of Peru flowering under his fat ball feeder. It makes you wonder where the seeds in fat balls come from. The most exciting aliens growing under our feeders have been Wheat and Nipplewort, so it must depend on the farmer growing the seed for the fat balls, as to what the contents are.

Do let me know if you find anything of interest rachel.42rr@btinternet.com