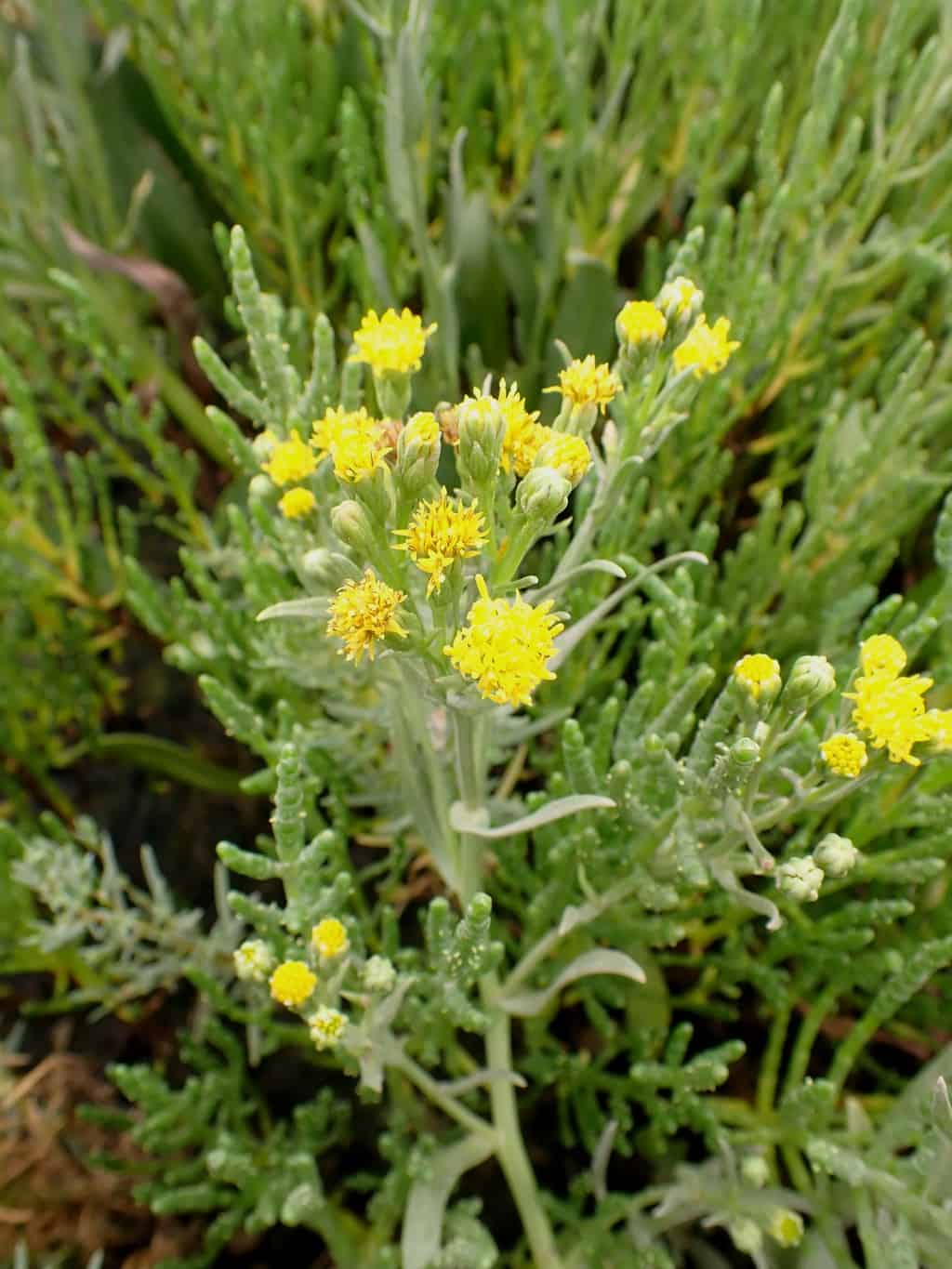 It was late August and we were standing on a raised finger of dry land reaching across the salt marsh to the northern edge of Blakeney Harbour. To our left, the mud lined channel of the River Glaven wound its way towards Cley, while to the right, the flat, muddy sands were alive with birds. Black and white Oystercatchers; tall stately Curlew and smaller Redshank, were all busily probing for food while the tide was low. Black-headed Gulls gave their raucous calls as they bickered over morsels scavenged from the shallows, while the grating shrieks of Little Egrets came from two birds disputing the right to fish in a prime location. A wader on a stony spit turned towards us and we were delighted to be looking at a beautiful Grey Plover in full summer plumage! Its face, breast and belly were jet black, edged with silvery-grey, making it the most elegant wader which comes to our shores from the High Arctic. A larger bird woke from its one-legged slumber in the edge of the river, stretched, scratched and preened before starting to feed in the fast flowing water. As it did so we could see its long, slightly up-curved beak, browny-grey back, white underparts and greenish legs: it was a young Greenshank, another bird making use of this vital refuelling spot for migratory birds. We walked on as far as The Hood, an area of sand dunes reached just before Blakeney Point. Here we sat on the dunes overlooking the sea while listening to the bubbling calls of the Curlew behind us. A pair of large waders flew west along the shingle, but their bills were straight and their flight rapid: they were Bar-tailed Godwits, more High Arctic breeders, probably on their way to winter in and around the Wash.

Before we left The Hood, we visited a hollow where sparse vegetation had stabilized the sand, making it a suitable nesting habitat for the Saltmarsh Bee. 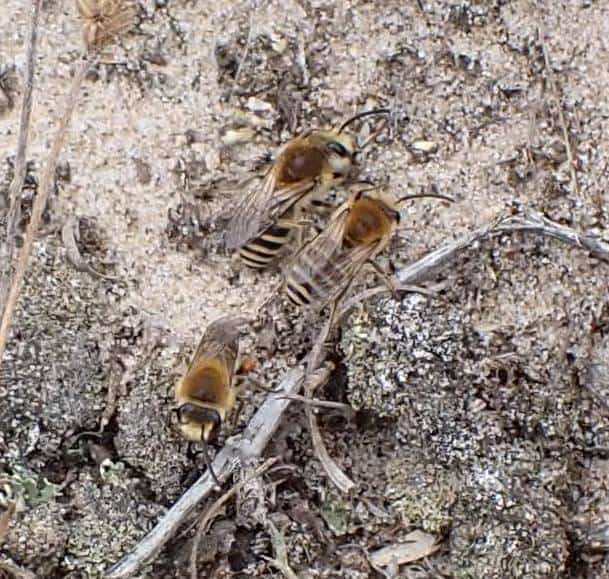 This is a small solitary species which nests colonially and is reliant solely on the pollen of the Sea Aster to provide nourishment for its developing larvae. The bees time their emergence to coincide with its flowering in August and September when The Hood is surrounded by its flowers. There are very few coastal places in the country that provide the necessary plants in close proximity to suitable nesting slopes, so they, like many other species are very vulnerable to the effects of rising sea levels caused by climate change. 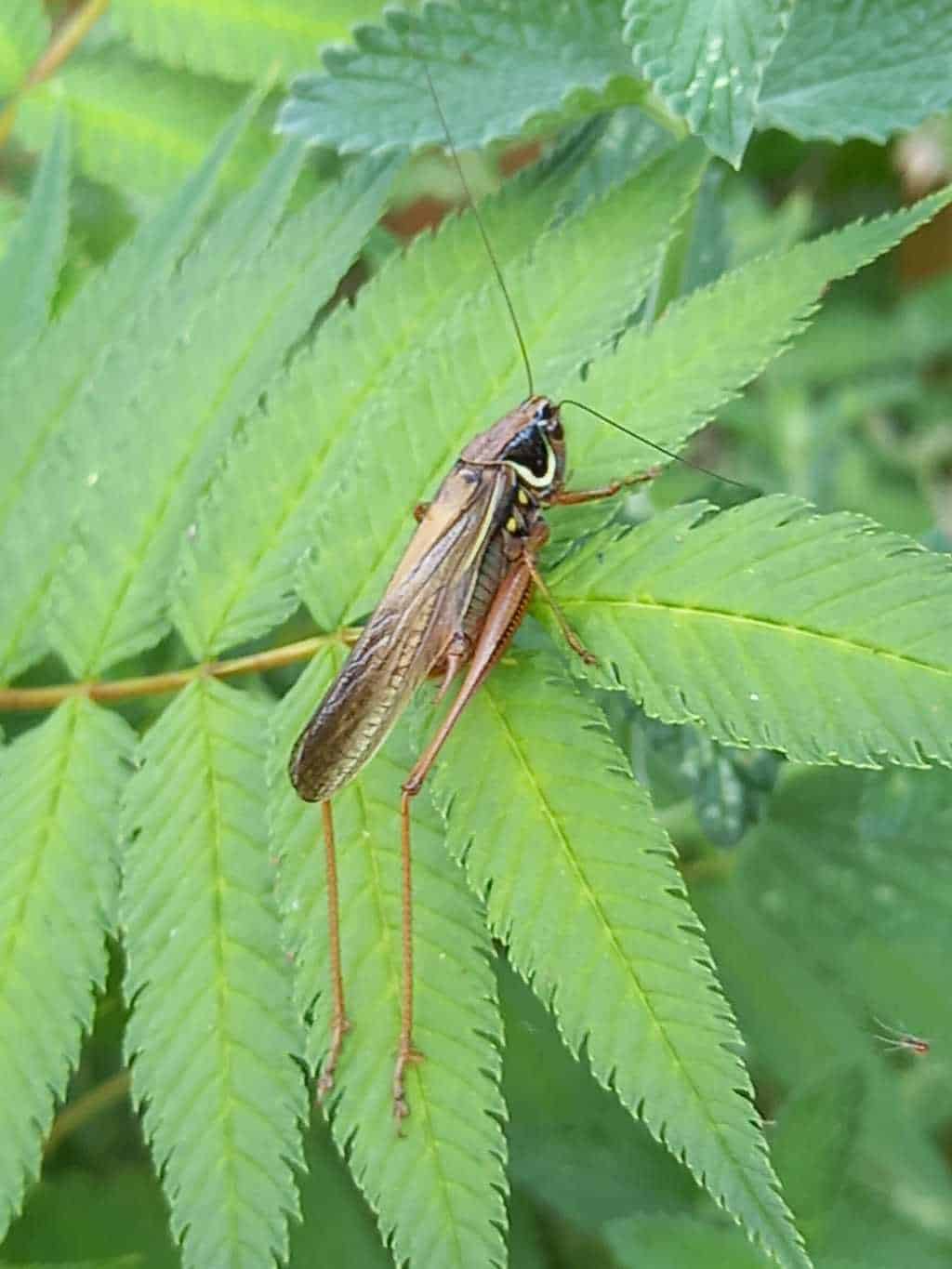 Some insects however are thriving as a result of the changing climate, such as the Roesel’s Bush Cricket that Rufus found on a leaf when going to feed the neighbour’s chickens. The photo Annie took showed that it was a long-winged form. When these bush crickets emerge in high density, some will develop extra-long wings to aid dispersal, which is why this species colonised the whole county within ten years of its first arrival in 2000, now being found in almost any area of suitable long grass.

Do let me know if you find anything of interest. rachel.42rr@btinternet.com