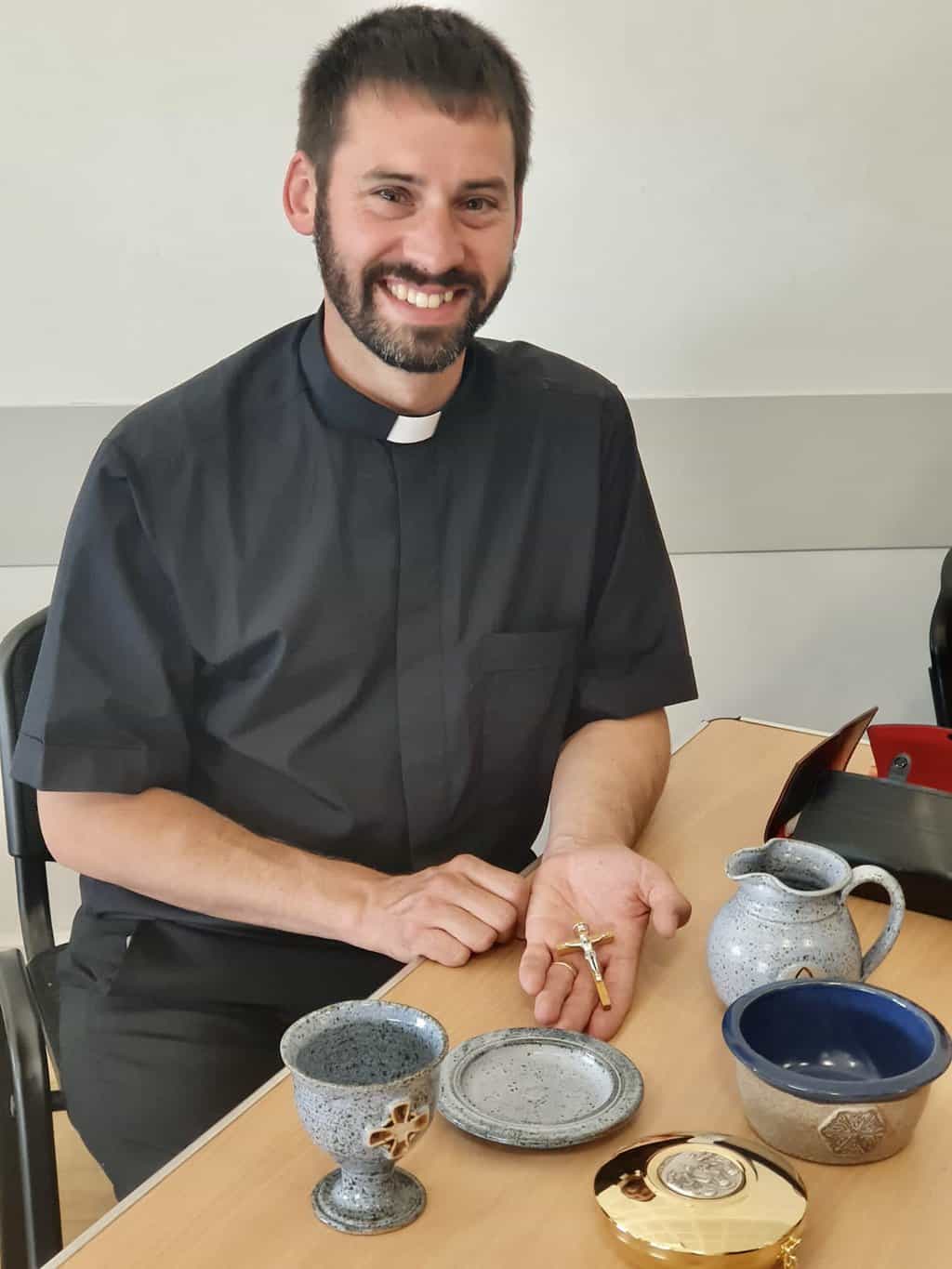 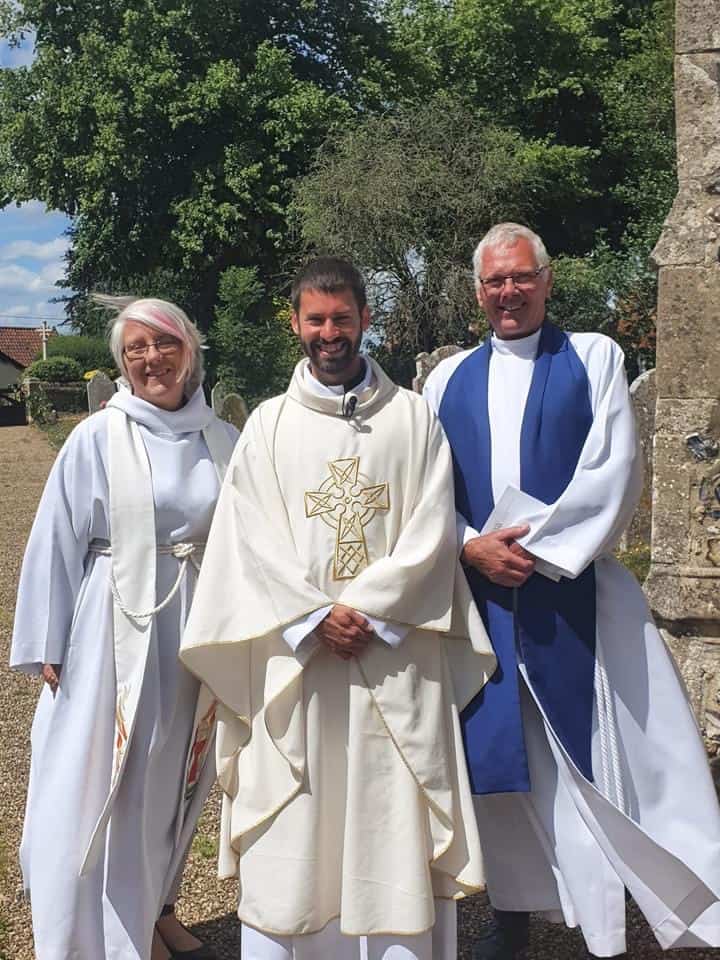 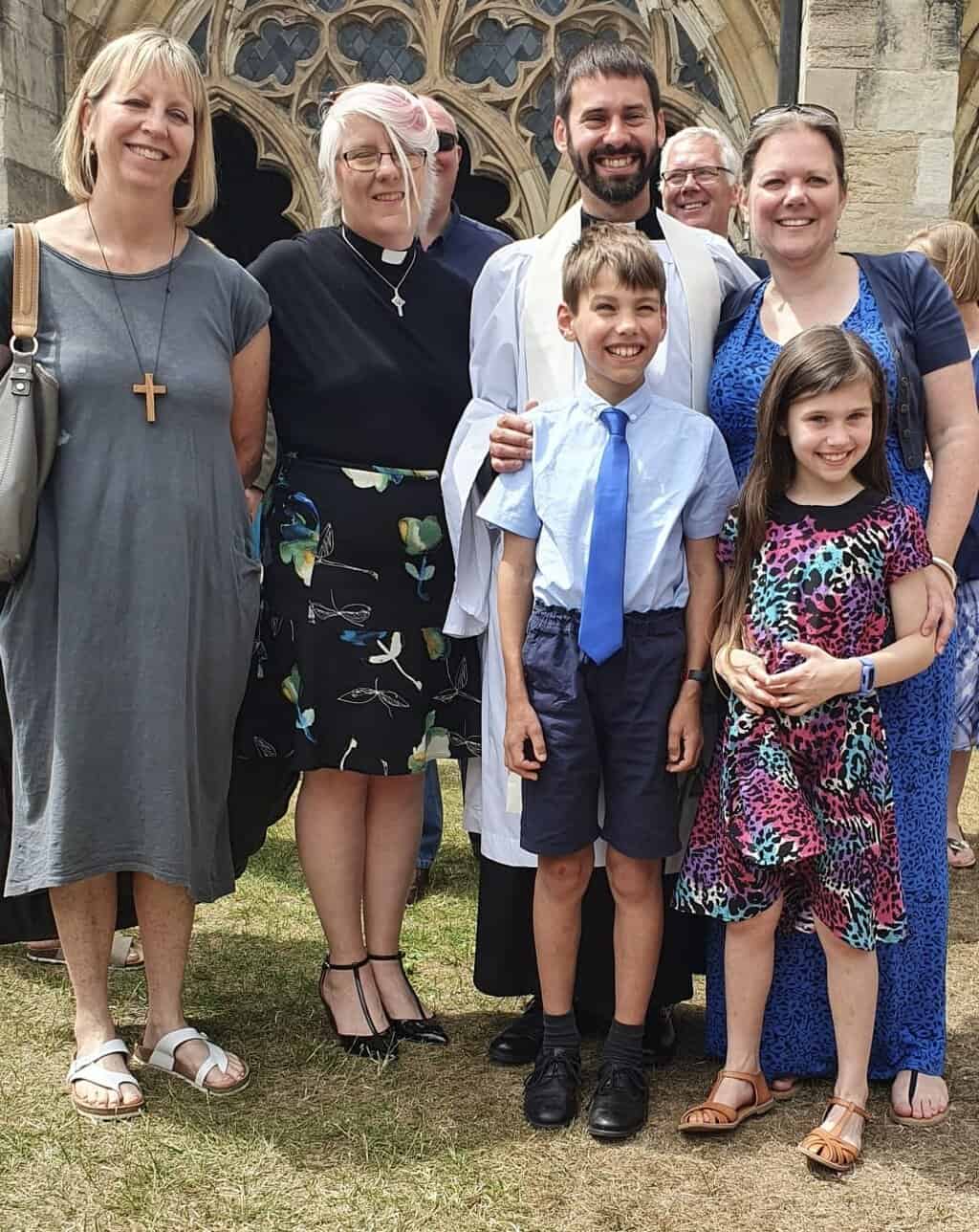 We have been blessed to have Rev’d Richard with us as Curate over the past 12 months. On the 25th June 2022, Richard was ordained Priest at Norwich Cathedral. The following day, parishioners from across the benefice joined Rev’d Richard as he presided over his first Eucharist at All Saint’s, Weston Longville with his father in law, Mark Ward LLM, providing the sermon ( which you can read below). After the service the congregation met at Lyng Village Hall for a celebratory shared lunch.

“I met Richard for the first time somewhere around 17 or 18 years ago. He and my daughter Laura were at UEA in Norwich. One weekend she brought him home. He brought beer – an excellent start. I decided his ordeal was bad enough without me asking him a million questions, so I didn’t. After they left Laura sent me an email which went along the lines of “Richard doesn’t think you like him because you didn’t talk to him much. I told him you don’t talk to anyone so he wasn’t to worry”.  Since then we have, I hope, formed a quiet bond which gave him the confidence to ask me to preach this morning, for which I am humble and grateful. He may be worrying what I might tell you about him that you haven’t already found out. I think I will let him stew a bit longer!

We had the option to change the gospel reading to anything we wished but having read it, I thought that it is rather appropriate for one who has committed himself to the service of God.

Not long after we met Richard was roped in by Laura to be a volunteer team member at Scripture Union’s Sutton-on-Sea beach mission, in Lincolnshire where we have had a family caravan for fifty years. Over the years, that two weeks has, I think, had a profound effect on Richard strengthening his faith and giving him the motivation to search more. He and Laura to got involved at St Peter Mancroft as well as their bell-ringing there. And some seven years ago now, I guess, Richard began his formal journey to ordination. Set against the world’s interests, pursuing a life devoted to God might have looked a bit like him heading for Jerusalem to the great temple when others like the Samaritans, who had their own great temple, thought he should journey their way. From my observation there have been very few, if any, who have tried to persuade Richard that this was the wrong way, including even those who may not share his faith, which I believe shows the respect and love Richard is held in by everyone, and the respect for his faith.

Making a commitment isn’t always easy is it? If we return to the gospel (Luke 9:51-62), Jesus on his way to Jerusalem challenges people to follow him. “Oh, I can’t because I have to …” comes the reply as people put their daily lives before their faith. And I have sympathy with them. It is only natural to want to tie up loose ends, explain your actions to people and so forth, because that’s how life is. Jesus appears quite harsh in his response, saying that anyone who puts his hand to the plough and looks backwards isn’t going to do well. But no-one ever said being a disciple would be easy. As we all might find out if we were to take a horse and plough or even a tractor and plough to a field, trying to go the straight way you intend is hard enough when you look forward, let alone when you are looking in other directions too.

So Richard, in being ordained priest is now firmly attached to Jesus’ plough for he has accepted the call to follow his Lord. The plough begins at one end of a field and eventually it gets to the other end having gone up and down, sometimes passing the same point over and over, and then it has to go to another field and start again. Richard has completed ploughing one field over the past year and from here he is in a new field, it’s right next door, but it is new. (At this point I held up a red “L” plate to signify that Richard can throw that away having passed his “test”) What is in that field – is it easy loam through which the plough will glide. Even if it is, is there a boulder hidden under the surface for him to smash into and bend the blade, is it boggy in places and very hard going? Well he doesn’t know yet and that is where he has to trust in God for help – and trust your grace for him. He will do the best he possibly can yet someone will complain, he will say something honest from his heart and someone will believe he is talking directly to them, perhaps critically, when he has no idea of their issue, and they may be upset.

Some years ago I was preaching at a Battle of Britain service and I had recorded the sound of the air raid siren which I thought the Air Cadets might find amusing. As she left church one of the regular congregation, a usually very mild mannered lady, nearly beat me to a pulp with her umbrella as she berated me for scaring the living daylights out of her because I had brought back that noise she had feared as a child. Well I lived and she forgave me and thankfully, although frail she is still with us to remind me. But we never know how what we say or do affects others, so we must trust in God that if we feel called to speak, he will help us.

And then there is the matter of the family. In a couple of years Richard will need to move on from here such are the rules of our Church. He will need to follow where God leads him. Where might that be, what effect will it have on Laura, on Jacob and on Hannah? Which kind of puts Richard into the situation that those who Jesus challenged to follow him faced, “I just need to go and…” may cross his mind for there will be dilemmas. He will have to weigh up the call against the practicalities. God doesn’t give us blinkers as we might the horse, he allows us to look around and that creates choices we have to make.

Richard, because I know Richard, won’t have now assumed he has become “supervic” just because the bishop agreed to ordain him priest. He won’t assume he knows it all, because he isn’t like that, but there will be those who need his help who won’t know that, who will now expect him to be “supervic”. (At this point I held up a “P” plate that recently qualified drivers sometimes use to indicate they are still getting used to driving.) Well let me remind you that if he stands any chance of being as good as he can be, he needs your support as well as God’s Grace to see him through the difficult moments. He needs you to help him if he asks for it or to be gentle with him if he innocently gets something wrong. He will need you to forgive him occasionally just as he will continue to forgive you when you rub him up the wrong way because he did it differently to the way “it has always been done”. And of course don’t assume he already knows every tradition back to when Adam was a boy!

A few years ago I was sent to the Methodist Chapel in my village to take a communion service as they had no-one so we came to the communion and I went from one end of the row to the other and expected people to get up and go back to their seats but they resolutely stayed put. What no-one had told me was that I was supposed to say a prayer for that row before they left. After a rather long pregnant pause someone let me know and order was restored, but I just wasn’t aware. We can’t all know everything!

In saying yes to Jesus, Richard may occasionally find himself at odds with his earthly masters, although I’m sure not with Helen. It has been a great privilege for me to be able to call Bishop Jonathan, Bishop of Portsmouth, my long term friend. He is a bishop and has a doctorate but he has the rare gift of a clever person, to understand that he still needs to speak plain English to his flock. A few years ago when Jonathan, was the suffragan Bishop of Southampton, his boss, the Bishop of Winchester had issued a decree which affected me. I asked Jonathan what I should do – should I obey the bishop even though in my case I didn’t feel it was the correct thing to do. Jonathan looked at me, smiled and said “Mark, do we always do what the bishop says?” I took that to mean my furrow was following God and in this instance I should continue, but that’s not always easy in the face of authority. Now I am sure Richard will never find himself at odds with authority in the Church but he may well do so with other more worldly authority and standing alone may be hard and if so he will need all those who love and support him to pray for him and if possible to stand with him.

I’m goin to finish with some words that Bishop Jonathan suggested to me. I sent him a text which said “I’ve been asked to preach at Richard’s first Eucharist – what would yo say to either him or his congregation”? With his usual wisdom he came back with some words, which are very much for all of as we struggle to be good Christians, or even wonder if we should become a Christian. It reminds us that we live in God’s presence not by our own might, but through his Grace, and that applies to Richard and to everyone else here. I believe it is originally from the Baptist tradition before the Iona Community adopted it as have many of our churches, and it recognises our own frailties and our need to love each other whether we get it right or wrong. So this was Jonathan’s text in reply which we now pray: